All had gone well during my pregnancy with Zach, my much wanted second baby boy. At least that was the case until January 21, 2015, two days before his due date. Suddenly I found myself in the hospital after sensing that his movements had decreased, and I ended up delivering him by emergency caesarean section soon after. That day I discovered that he had suffered a very rare foetal-maternal haemorrhage, where the membrane in his umbilical cord ceased to separate his blood supply from my own. Why this happened remains unknown; our obstetrician had never seen it occur in his 25 years of practice.

Over the next week our family spent as much time with Zach as we could. We were able to care for him by changing nappies, taking his temperature, and wiping his mouth. Every milestone was celebrated, like when he opened his eyes and appeared responsive to our voices, or when he stretched his limbs and gripped our fingers. During this time we also received amazing support from our families who brought food, did the washing, and helped care for Zach’s big brother each day.

The medical team stabilised Zach so he was able to have an MRI scan on January 29. At this point he was mainly breathing on his own but was still hooked up to the ventilator. The next day we met with the Paediatric Consultant who delivered the most devastating news we could have received: The extensive damage to nearly all parts of Zach’s brain, including his brain stem, made it very unlikely that he would survive.

That evening Zach was removed from his ventilator and made comfortable. For the next four nights he slept with us in the NICU family room. During this time he was like any other newborn requiring feedings, nappy changes, and lots of sleep. He was fed expressed breast milk through a tube and often woke up crying from hunger.

On the evening of February 2 we had a family picnic outside while Zach slept in his pushchair, and later on we gave him his first bath. As the night progressed he started to feel very cold and his breathing became increasingly laboured as he slept between my husband and me. The next morning Zach died peacefully in our arms.

Leaving the hospital without our baby boy was the most surreal and devastating feeling imaginable. Our hearts ached and our dreams for his future were suddenly lost forever. So many questions were left unanswered: Why did this happen? Why us? What did we do to deserve this when we wanted him so much?

I never wrote about my grief journey following Zach’s death. Sometimes I wish I had. I would often “write” what was on my mind in my head, and at times I’d share these thoughts with friends (new and old) who have been there for me. I have learned many things over the past year, including how difficult it is to be a friend to a bereaved person. People fear they will upset the person in mourning if they say “the wrong thing” or mention the deceased’s name. I have experienced both sides of this. I wish I had always known what I know now, and I would have been a better friend in the past. I now know that saying nothing is far more hurtful than saying the wrong thing (except “everything happens for a reason”—never say that to a bereaved person).

Talking about Zach cannot make me sadder than I already am. It actually makes my heart smile even though you may see tears. And what seems like ancient history to a non-bereaved person remains all too real for the bereaved. We lost Zach over a year ago and my grief is still part of my daily life. It is not always as raw as it was, but it does not take much to trigger it. Some days a bereaved person may seek comfort with loved ones and other days they may seek solitude. I know I have stopped being social at times and I have not always had the energy to respond honestly to the question “How are you?” It’s a different life from my previous one, but this is what I have had to do to survive.

I want to wholeheartedly thank my friends who have not given up on me, who have checked in regularly just to let me know they are still thinking of me and Zach. For those who have not lost a child, it is hard to understand what a bereaved parent is going through. It’s easy to separate yourself from them and think, “Thank God that isn’t me.” But the truth is that we can all imagine what it would be like to be without a loved one, and if we allow ourselves to carry a piece of the bereaved parent’s grief, we can also imagine the unspeakable pain of losing a much loved child.

To honour Zach’s life, we have made some stickers to be inserted into books and given to children in need for Christmas. My Aunt recently told me that the two books she donated to her local Parish were given to a young mother whose son was also born in January 2015. While I’m happy these books were donated in Zach’s memory to a baby who needs them, I so wish our own little boy was here with his older brother reading to him. 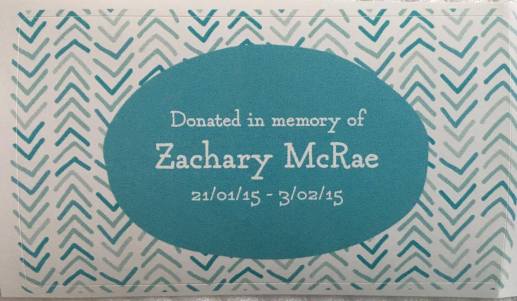 Zach will always be part of our family. We talk about him with his older brother all the time and we have filled our home with photographs of him. We have Zach’s ashes at home and have had a memorial bench seat installed in the Timaru Botanical Gardens. This is our special place where we go to remember him. He will be forever in our hearts. 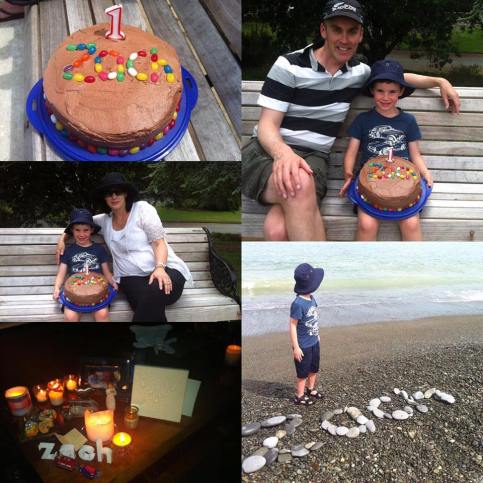