Last Friday after work, I went to the hospital for my weekly nonstress test. At this point, I had probably completed at least ten of these procedures throughout this pregnancy—some of which had been scheduled as part of my third trimester care plan, while others had occurred during impromptu visits to Labour and Delivery to ease my ongoing anxiety. As per usual, I lay strapped to the fetal monitor, heaving sighs of relief as my son’s reassuring kicks rocked my belly.

But then something unexpected happened. Seemingly out of nowhere, the resident OBGYN came to my bed and introduced himself.

“Your test strip is showing frequent tightenings,” he said, a hint of concern in his voice. “Are you feeling these contractions at all?”

I raised an eyebrow and took a moment to consider the question. “No,” I replied. As was the case during my pregnancy with Leah, I had yet to feel any contractions, Braxton Hicks or otherwise. In fact, when I went to the hospital for my first and only nonstress test with her shortly before she would be delivered by emergency c-section, I felt no discomfort at all, even as the test strip showed a steady pattern of uterine tightenings.

When I told the doctor as much, he said they would continue the test for a while longer to monitor how things progressed, but there was a chance that labour might be starting soon.

There I was, 34 weeks pregnant to the day, being told that I might be heading into preterm labour. I imagine that many women would become utterly distressed by such a development, and rightfully so. No mother wants to watch her child endure an extended stay in the NICU, not to mention the complications that often come with delivering an otherwise healthy baby prematurely.

But you know what I felt in that moment? Hope. Hope that maybe—just maybe—they would take this boy out now, while he’s still alive.

You see, I have the misfortune of knowing that there are far worse things than a newborn spending some time in the NICU before eventually going home. Likewise, I know that a healthy female body is not necessarily the safest place for a baby to spend the final weeks of the third trimester, where fatal complications can strike at any time without warning—be it a massive fetomaternal hemorrhage, an umbilical cord accident, a placental abruption, or an undetected infection.

Much to my disappointment, when the doctor returned to check my test strip half an hour later, the contractions had subsided. I was sent home with the usual comments about how “happy” my active baby was, knowing all the while that having a “happy” baby in that particular moment did not guarantee that he would still be alive that night, the next morning, or even in a few hours.

Still, I left the hospital that evening acutely aware that, for better or for worse, I had officially entered the home stretch of this pregnancy. Unfortunately, I have not been able to draw any comfort from this realization. Simply put, the pregnancy “home stretch” is a completely different experience for women who know the agony of stillbirth and neonatal death. As such, unlike most parents who spend the final weeks of pregnancy confidently anticipating their babies’ arrivals, I have spent this time more fearful than ever for my son’s life.

I still vividly recall having one such moment of overwhelming fear when I was 38 weeks pregnant with Leah. While I was largely immersed in my long-delayed pregnancy bliss at this point, one afternoon I suddenly found myself consumed by a desperate urge to get her out of my body while she was still alive. After enduring eight months of grueling anxiety, it was torturous to know I was so close to the finish line, yet still without a guarantee that she would make it into the world unscathed. I remember sitting on my bed and crying, knowing that I was powerless to protect the girl whom I loved so much. However, after half an hour or so I was able to talk myself out of my anxiety spiral by meditating on the conventional wisdom that had been recited to me over and over again throughout my pregnancy:

We’ve made it this far without any complications. Statistically speaking, if something were to go wrong, it would have happened already. Just enjoy these final days of your pregnancy!

Every day the majority of full-term babies are born healthy and alive, so why should your pregnancy end any differently?

You are young and healthy. Your body knows exactly what it’s doing. Just trust that Leah will come out when she’s ready!

God loves Leah and wants what’s best for her, so why would He suddenly abandon her when He has been answering your prayers for her protection all along? Have faith that God will provide!

I cannot count how many of these anxiety spirals I have had throughout the past few weeks. The key difference, however, is that I can no longer talk myself into a “reasonable” state, since our culture’s conventional wisdom about pregnancy and childbirth no longer applies to me. I know firsthand that making it to the final weeks of a healthy and complication-free pregnancy does not mean I will get to raise this child into adulthood. Similarly, I can no longer presume that everything is “probably fine” when I suddenly realize I haven’t felt my baby move for any given period of time, be it ten minutes or one hour. Simply put, I know that the pregnancy “home stretch” is not a guaranteed safe zone, and each day I am cognizant of the fact that the people around me may be eagerly anticipating another baby who will never come home.

And herein lies my dilemma: Throughout this pregnancy my guiding mantra has been to take life day by day—and when that proves to be too much, I take it moment by moment: Today I am pregnant. Right now my baby is alive. I don’t know what the future holds, but in this moment everything is okay. As it is, trying to plan beyond the here and now usually leaves me feeling overwhelmed and hopeless. But this mantra proves increasingly difficult to abide by as my c-section date draws nearer.

As it is, the fact that I expel the bulk of my energy each day just getting from one hour to the next means I am not mentally prepared for the possibility of bringing this boy home in three weeks’ time. Likewise, when I try to envision this positive outcome, every cell in my body seems to scream out in protest, reminding me that I’ve been down this road before, and that allowing myself to be optimistic will only make me complacent when I should actually be more vigilant than ever.

Nevertheless, throughout the past two weeks my inner pragmatist has forged a stake in this ongoing mental battle, reminding me that I must make some basic preparations for my son’s birth—after all, the fact remains that I am statistically more likely to bring a healthy baby home than not. And so, one sunny afternoon, I summoned every ounce of emotional strength that I could muster and finally opened the door to Leah’s brother’s room.

For the previous four weeks since our move, this room’s contents had been left scattered across the floor and shut away from sight. I simply could not enter this space and confront the painful memories, as well as the fears of the uncertain future, that lurked inside. Just as I had suspected, walking into this room felt like I was plunging headfirst into my grief and trauma. Suddenly I was surrounded by the items that I had excitedly selected, washed, and assembled for Leah only one year prior—and there was nowhere to hide from the anguish they triggered.

As much as I had hoped to simply push these feelings aside and delve into the work that needed to be done, all I could do was sit in the antique rocking chair that had been given to me for Leah—the chair that I had so vividly imagined using to feed her, rock her to sleep, and read her bedtime stories each night—and cry profusely. 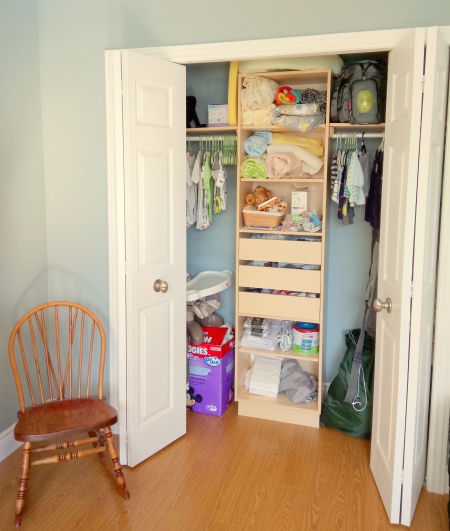 I cried for the daughter whom I love more than life itself, but whose own life was snatched away before it ever truly began.

I cried for the son whom I have grown to love with equal ferocity throughout the past eight months, yet who is not guaranteed a long, healthy life in this world anymore than his sister was.

And finally, I cried for myself—out of the utter helplessness and hopelessness I felt, knowing that I may never get to share my deep reservoir of maternal love with either of my children in this lifetime.

Eventually, I was able to get out of the chair and wipe away my tears. That afternoon I managed to unpack one bag of gender neutral baby clothes that had once been washed and folded in joyful anticipation of my daughter’s arrival. The following day, I started organizing the closet. Over the course of the next week, I assembled the bassinet, prepared the diaper changing station, and hung up the frames that would have eventually adorned the walls of Leah’s bedroom. And then, several days ago, I finally took the last, most emotionally excruciating step:

I handpicked a few of my favourite gender neutral newborn outfits, all of which had originally been purchased for Leah, and re-packed my hospital bag.

Contrary to what people may presume, I do not consider this to be a “step forward” toward faith or optimism that things must inevitably turn out differently this time. The brutal truth is that there has been very little joy or excitement in preparing for another baby who may never leave the hospital. Yet in the depths of my fear and uncertainty, there has been love—boundless, heart-bursting, undeniable love. And so, each day I tell myself that Leah’s brother deserves to have a space in our home awaiting his arrival, even if this room proves to be a painful haven where I will go to grieve his unlived life. To some extent, I have accepted that I cannot predict or control what happens in the next three weeks. Instead, all I can do is remain vigilant, take nothing for granted, and cling to any passing glimmer of hope I can muster.

And so, with a wounded heart and weary spirit, I wait.